It’s hard to find any plant more suitable for indoor growing than Pothos varieties from the Epipremnum genus (also known as devil’s ivy). These classic houseplants are pretty much a must in any collection, not in the least because of their easy care and propagation. And there are so many types of Pothos: selective cultivation has lead to a wide range of different appearances.

Keep reading to find out my 7 favorite types of Pothos, but be careful as you might find yourself becoming addicted to expanding your collection!

Probably one of the most sought after Pothos cultivars and many an enthusiast’s favorite is the spectacular Pothos ‘Marble Queen’. She lends her name from her intense variegation: the leaves contain a large percentage of cream coloration, mixed with small green specks.

Pothos ‘Marble Queen’ care is easy like all Pothos cultivars, though keep in mind that you’ll have to provide this one with a relatively bright spot to avoid the beautiful variegation from disappearing. Still no direct sun, as that will burn the leaves, but something nice and light so they don’t revert back to green. Remember that even with plenty of light the variegated cultivars grow a bit slower than pure green ones, so don’t expect any growth miracles with this one.

If you’d like to acquire your own ‘Marble Queen’, keep in mind that luck with finding this one in-store varies. You’ll be more likely to stumble upon the more common cultivars, like the Golden Pothos. If this is the case, you can always get yours online, like on Amazon here.

Pothos tip! Did you know that Pothos actually prefers growing upwards rather than downwards? Let yours grow on a plant totem instead of using a hanging planter and it will reward you with huge leaves and vigorous growth.

The funky Pothos ‘N’joy’ differs from some of the other cultivars in its leaf texture. Many varieties, such as ‘Marble Queen’, feature thick and leathery leaves. ‘N’joy’, though, has thinner and more papery foliage which makes for a more delicate look. The leaves are mostly green, especially in the middle, with lovely white variegation around the edges.

Pothos ‘N’joy’ makes the perfect choice if you don’t have space for a large houseplant, as its leaves stay quite a bit smaller than most cultivars. Additionally, it grows quite slowly. Provide it with bright but indirect light to avoid the variegation on the leaves from yellowing or even disappearing completely.

Pothos ‘N’joy’ care is identical to that of other Pothos: water when the soil has dried and mostly just ignore the plant otherwise. You might find this one a bit difficult to acquire in-store since it’s one of the newer cultivars, but luckily it’s available online as well.

If you’re looking at the image of Pothos ‘Pearls and jade’ below and getting a feeling of déjà vu, that’s understandable. This cultivar looks a lot like the previously discussed Pothos ‘N’joy’, with papery foliage as well as that typical slightly crinkly leaf look. They are not the same, though!

Like ‘N’joy’, Pothos ‘Pearls and jade’ is a compact cultivar with smaller leaves that won’t overgrow your house. Give it bright indirect light and a well-draining container. Soil is not much of a concern: regular potting soil should work just fine for all Pothos cultivars.

Pothos tip: to make things more confusing, there is another small-leaved, papery cultivar out there, though it’s quite uncommon. It’s called Pothos ‘Glacier’ and it’s really similar to ‘Pearls and jade’. If you can tell them apart at all, it’s because of a more silvery coloration on the ‘Glacier’.

Now here’s a cultivar you won’t have trouble distinguishing from other Pothos types! Pothos ‘Neon’ is almost impossible to miss due to its very light, yellow-green leaves. When grown in bright light this is quite a spectacular one, with the new growth showing especially bright coloration.

Unlike the small-leaved varieties discussed above, Pothos ‘Neon’ sports the normal thick, waxy foliage you’d expect from the genus. It grows at a normal (rather quick) rate and is just as easy to maintain as other Pothos cultivars.

You’ll be able to find a neon Pothos in most shops and garden centers that stock a good variety of houseplants. If you’re still having trouble, you can also buy your Pothos ‘Neon’ online. 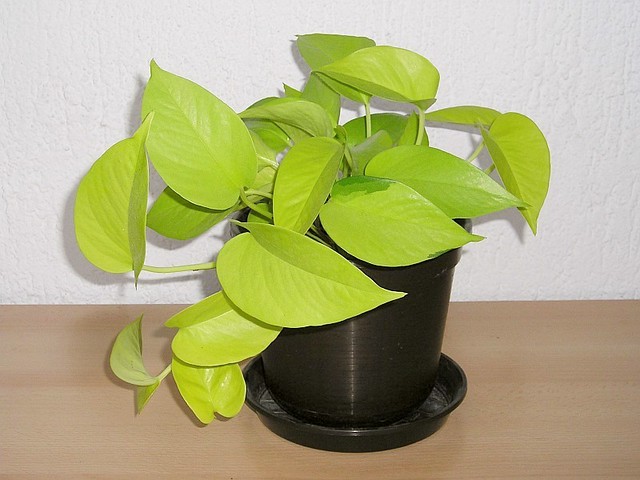 The eye-catching ‘Manjula’, which was created by the University of Florida, is definitely one of the more unusual Pothos cultivars out there. It looks a bit like the previously discussed ‘Pearls and jade’ and ‘Glacier’, but with a keen eye, you’ll quickly be able to spot the differences.

Although it also sports relatively small leaves and a cream-and-green variegation pattern, the colors in this cultivar almost blend together. This makes for areas on the leaves that are a mix of cream and green at the same time. You also might be able to tell Pothos ‘Manjula’ apart from its leaf texture. The foliage on this cultivar is very crinkly and wavy, not flat like most other types of Pothos. The leaves are also quite wide.

Pothos tip: If your Pothos is looking a bit sparse, you might not be providing enough light. Move the plant to a brighter spot and prune the stems, planting the cuttings back into the same pot to make for a fuller look.

Probably the most common Pothos cultivar out there is the golden Pothos, which derives its name from its yellow variegation. You’ll find this one anywhere from your grandma’s house to forests all over the world – including ones that it doesn’t naturally belong in, since it has spread far beyond its original habitat of French Polynesia. The same factors that make Pothos an easy houseplant have also made it hard to eradicate.

Golden Pothos care is identical to that of other Pothos varieties. Keep it in at least moderate lighting if you don’t want to lose the gold variegation, as a golden Pothos kept in low light will revert back to growing pure green leaves. Golden Pothos propagation is a breeze as well and with so many out there it’s not difficult to acquire a cutting to call your own.

You’ll find this Pothos type in most plant stores without much issue, both in hanging form and grown on totems. You can also buy your golden Pothos online on Amazon here.

Pothos tip: Normal golden Pothos too plain for you? Check out Pothos ‘Jessenia’, which is somewhere in between golden Pothos and ‘Marble Queen’ appearance-wise.

After all those spectacularly marbled and variegated and splotched types of Pothos we’re left with one more variation to discuss. And this is one for the minimalists: Pothos ‘Jade’ is just a nice emerald green and maybe some very slight gold variegation, but nothing more. It does grow very quickly, which is a great feature for those going for that jungle look.

This Pothos variety may not be as flashy as the other types we’ve discussed, but it’s a beautiful plant nonetheless. Note especially how the waxy shininess of the leaves is more noticeable due to the lack of variegation. If you’d like to maintain this shiny look, wiping the leaves with warm distilled water helps remove dust without leaving calcium residue. Skip the commercial leaf shine; it can make your Pothos unable to breathe through the pores on its leaves.

You can find a Pothos ‘Jade’ online here. Although it’s one of the more basic varieties of Pothos you might be surprised to have trouble finding it in local plant stores. I suppose they prefer carrying the more flashy cultivars!

How amazing is this satiny, silver-green specimen? Also known as satin Pothos or silver Philodendron, Scindapsus pictus shares many of the same characteristics. It’s also a creeping plant that likes to attach to surfaces and grow upwards, making it an equally great choice for both hanging planters and plant totems.

As you might know if you’ve been growing houseplants for a while, taxonomy for plants can be a mess. Common names pop up seemingly out of nowhere and even scientific names can change based on new and more detailed research. The satin Pothos/silver Philodendron is a good example, as despite its names it’s neither a Pothos nor a Philodendron. Fooled ya! It might look like a fancy Pothos cultivar but it’s a different species.

What’s the deal with all those cultivars?

You might be wondering, after reading this, how the whole cultivar thing works. Why are there Pothos out there that are so similar but have different names? Where do all these even come from anyway? We won’t go into the details, but the short version is as follows.

Discussing all the different types of Pothos out there would be a challenge, as there are so many, though this article covers the more common ones. If you’re still hungry for more, why not check out such cultivars as Pothos ‘Cebu blue’, ‘Jessenia’ and ‘Glacier’? And if you just like vining houseplants in general, don’t forget to also check out English ivy.

If you have any more questions about the different types of Pothos or if you want to share your own experiences with this quintessential houseplant, don’t hesitate to leave a comment below!

6 thoughts on “7 types of Pothos for your indoor garden”

This site uses Akismet to reduce spam. Learn how your comment data is processed.

What are you looking for?