Prince of Orange – You’re Going to “Fall” for Philodendron

The Philodendron Prince of Orange is an exotic, hybrid variety as a result of crossing several plants from the Philodendron genus. The plant has a compact, bushy growth habit and thrives indoors as a houseplant.

The Prince of Orange Philodondron’s foliage goes through several color transformations from emergence to maturity.

The foliage begins as orange-bronze, turning a salmon color, then takes on a golden tone.

The leaves’ mature color shifts to a light green, then darkens to a deep green. It’s like fall in reverse. The plant is self-heading with huddled petioles hidden under the lush foliage until the plant matures. Small, white blooms appear in spring.

For optimal foliage color, provide bright, indirect sunlight or a half hour of direct sunlight in the morning or evening. Consistent, low lighting results in fading of the plant’s bright leaves. Never expose your plant to all-day, full sun as it scorches the foliage.

Allow the top 1 to 2 inches of soil to dry between waterings. Water until the moisture runs through the pot’s drainage holes and into the drip tray. Follow this routine from early spring to early fall. From mid fall, and throughout the winter, reduce waterings but don’t let the soil dry completely.

Soil and Fertilizer Needs for The Prince of Orange Philodendron

For the best Prince of Orange Philodendron care, grow the plant in a well-draining soil, high in organic matter. Combine equal parts potting soil with peat or compost and add orchid bark to the soil mix to improve drainage if needed. A succulent soil mix from a garden center, with some peat added, is an acceptable alternative.  Withhold fertilizer if your soil is already high in organic matter. If the plant’s growth is slow, supplement with an NPK 10-10-10 fertilizer once every two months or a Fish emulsion fertilizer once every two weeks.

Temperature and Humidity for Prince of Orange Philodendron Care

Maintain temperatures between 65 to 80 degrees Fahrenheit (18 to 27 degrees Celsius) for optimal growth. The plant will tolerate higher temperatures but requires more frequent watering. Avoid temperatures below 55 Fahrenheit (13 Celsius) as growth is slowed and foliage may suffer. Keep humidity levels at 50 percent or higher. Compensate for low humidity by misting the plant three to four times per week or using a pebble tray under the plant’s drip tray.

Propagating the Philodendron Prince of Orange

Propagating the Prince of Orange Philodendron is more difficult than other varieties due to its self-heading growth.

Propagation by cutting is possible, but only from a mature plant with new growth at its base. In the spring, cut the new growth if it has at least two visible leaves attached. Use sharp and sterile shears.

Allow the cutting to cure and callous for two days before transplanting into a pot with the recommended soil mixture. Keep the soil moist until roots form and new growth is visible. Once the cutting is established, care for the plant as a mature one.

Propagation by air layering offers the highest chance of success. You will need a six-inch, resealable bag, water-soaked sphagnum moss, and twist ties. Create several small holes at the bottom of the bag. Fill the bag with a handful of soaked sphagnum moss and cut slits at the top of the bag to resemble flaps.

Locate any aerial root bumps at the base of the new growth. Use a sharp and sterile knife to cut a slit 1/16 of an inch (2mm) deep under the node. Insert the stem into the moss-filled bag and wrap the moss around the area with the slit. Wrap the bag’s flaps around the stem and secure with twist ties to hold the moss bag in place. Keep your plant in bright shade and remoisten the moss, as needed, until new roots form from the slit. Once the new roots are at least two inches long, remove the bag from the stem. Cut the stem with sterile shears to remove it and the new roots. Transplant the cutting into the recommended soil and care for it as a mature plant.

The Philodendron Prince of Orange is susceptible to Erwinia blight and pseudomonas leaf spot, often on younger plants. The cause is attributed to water drops left on the foliage, allowing fungus to form. Isolate the affected plant to prevent spread and prune any diseased foliage. Keep the leaves dry and withhold misting.

While rare, infestations of mealybugs, aphids, and fungus gnats are pests to watch for. Indications of an infestation are the presence of insects on the foliage and the sticky honeydew they excrete after feeding on the plant. Treat the infested plant with an insecticidal soap to solve the issue.

The Philodendron Prince of Orange is one of the more colorful Philodendron varieties. Its color-shifting foliage is prized among houseplant collectors, and for good reason. While propagation is more difficult than other varieties, the general care needs of this plant are simple.

Are Prince of Orange Philodendrons Toxic to Pets and Humans?

Yes, all Philodendrons are considered toxic and should be kept away from pets and small children.

Why Are There Dark Spots on My Prince of Orange’s Leaves?

Dark patches on the foliage may indicate the leaves are exposed to cold temperatures or drafts. Ensure the plant is not near air conditioning vents or drafty windows during low temperatures.

Why Are the Leaves on My Prince of Orange Philodendron Yellow and Wilting?

Wilted, yellow leaves may indicate the presence of root rot, caused by overwatering your plant. Remove the plant from its pot and inspect the roots. Dark and mushy roots indicate rot. Trim any affected roots and repot the plant in a clean pot with fresh soil.

Why Are the Leaves on My Prince of Orange Plant Deformed?

Deformed growth of foliage may indicate damage due to excessive fertilizer use. Reduce the frequency of feedings and dilute the fertilizer to half strength.

Can I Grow My Philodendron Prince of Orange Plant Outdoors?

The recommended climate for growing this plant outdoors is USDA zone 10. 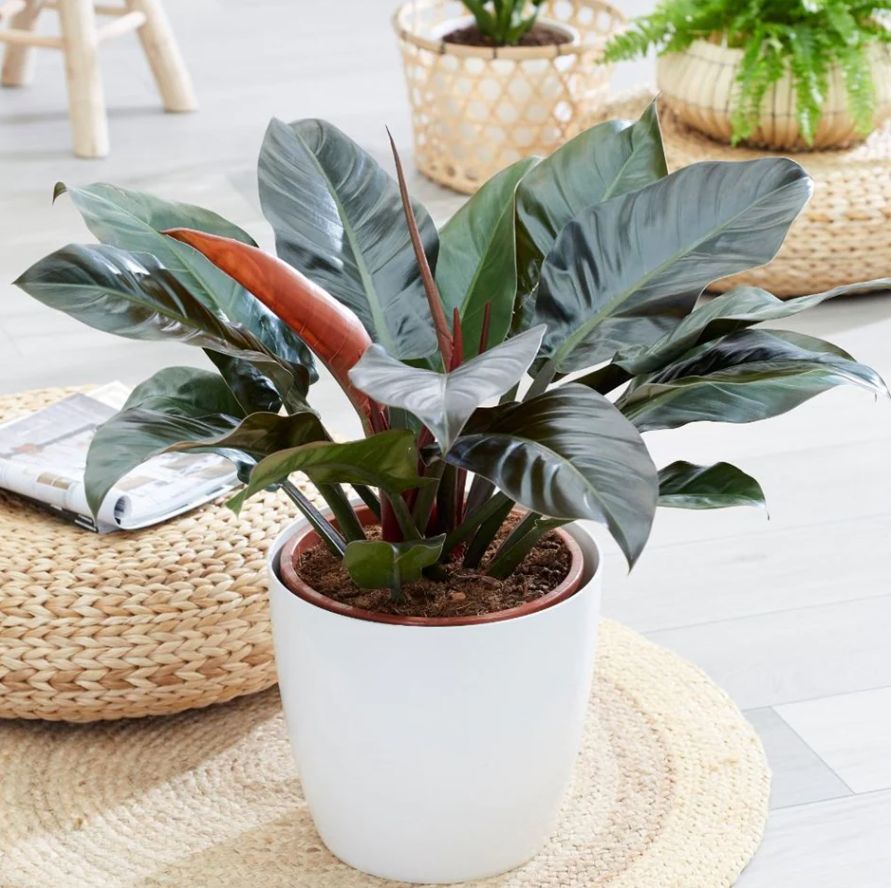